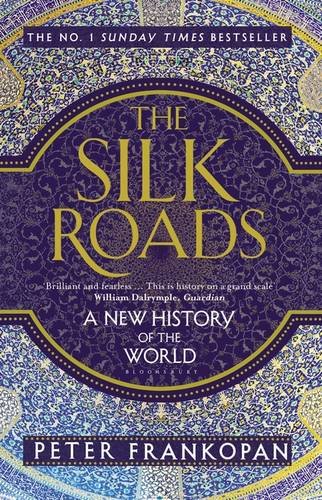 The Silk Roads: A New History of the World, by Peter Frankopan.
(Bloomsbury, 2015, HC,  ISBN: 978-1408839973, 656pp.)
No one has leapt to offer suggestions for me to review this month. (Understandable: it’s February, and February is a grim month at the best of times.) So you’ll just have to put up with me taking a ramble through what interests me, and offering you a reaction to Peter Frankopan’s The Silk Roads: A New History of the World.
I’m calling this a reaction rather than a review, because I’ve stopped 180 pages into this 500+ giant hardcover brick in order to gather my thoughts about what I expected from The Silk Roads: A New History of the World, and what it turns out it actually provides.
The Silk Roads is a universal history, or at least is trying to be one. It begins with Achaemenid Persia and continues up to the most recent American wars in Afghanistan and Iraq. I have not read this far: by page 180 Frankopan has just about dealt with the Frankish sack of Constantinople in the early 1200s CE and moved on to Genghis Khan. That means, of course, that fewer than 200 pages have been devoted to eighteen centuries of history, leaving more than 300 pages for the more recent eight.
From a history that references Central Asia with its title — “Silk Road” is a term coined by a 19th century German traveller and geographer, Ferdinand von Richthofen, and popularised by the Swedish explorer (and admirer of the Third Reich) Sven Hedin in a 1938 book — one expects a certain focus on Central Asia, a book that centres the sweep of the continent from Dunhuang and the Jade Gates to China in the east to the Dardanelles in the west. A book about the enduring influence of Merv and Samarkand, Bukhara and Balkh, Khiva and Karakorum, Baghdad and Beijing: the interchange between the Hellenistic kingdoms of Central Asia and the spread of Buddhism, the effect of Central Asian sciences and traditions on the early Islamic caliphate, and some history of the Tang Chinese and the development of China, and how Central Asia spoke to East Asia and South-East Asia.
You would, perhaps, expect a book that acknowledges that between late third/early fourth century CE and the sixteenth century CE (post-Columbus and de Gama, when Europe’s serious colonial imperialism began), Europe was a backwater. Essentially, in terms of major intellectual and political developments, there’s a millennium where Europe’s at best a poor, isolated, inward-looking country cousin — with the exception of Muslim Spain.
But instead of focusing on the history of the world as it might look from the point of view of, say, Merv or the ports of the Persian Gulf, The Silk Roads recapitulates a familiar (and familiarly Eurocentric) vision of history. Frankopan spends more paragraphs on early Christianity’s church councils than the entire context and history of Zoroastrianism, and more time on the life and conquests of Alexander than all of Tang China. The medieval crusading period is mostly dealt with from the perspective of Christian individuals — far fewer Islamic rulers and their responses to the conflicts of that period are spoken of than Christian ones.
It’s just… this is not a new history, okay guys, this is the same old history and not a particularly illuminating version. I read S. Frederick Starr’s Lost Enlightenment: Central Asia’s Golden Age From The Arab Conquest To Tamerlane last year, and I was deeply impressed by his command of Central Asian sources, his ability to draw connections, his explanatory early history of Central Asia, and the way in which, despite focusing on a limited period, he wrote a history of intellectuals and scientific development that was, because of the connections, truly global. Starr’s achievement shows up Frankopan’s shallow engagement with non-Eurocentric histories and contexts for at least the first eighteen centuries of his history.
Before I throw up my hands and expectorate invective for my conclusion, I’m going to quote a paragraph from this book that added insult to injury — or perhaps injury on top of insult on top of insult, I’m not quite sure.
This is the second paragraph of the first page of the chapter entitled “The Slave Road.”

“The Rus’ were careful with their prisoners: ‘they treat the slaves well and dress them suitably, because for them they are an article of trade,’ noted one contemporary. Slaves were transported along the river systems — remaining chained while the rapids were negotiated. Beautiful women were particularly highly prized, sold on to merchants in Khazaria and Volga Bulgaria who would then take them further south – though not before their captors had sexual intercourse with them one last time.” (Frankopan, 2015, 117.)

And then he just — moves on, without contextualising any of this from a social history point of view, to talking about slavery as vital to Viking and Rus’ economies. No comment on what “treat[ing] the slaves well” might mean to the slaves themselves, no pointing out that transporting people in chains while negotiating rapids might not actually be treating them all that well, and no acknowledgement that having sexual intercourse with enslaved women is rape. You can say rape in a history book, Peter Frankopan! (And you can stop pretending that slaughtering the inhabitants of cities is just good business sense for conquerors, while you’re at it.) (And you can rephrase that whole paragraph to something less full of slavery apologia and rape culture assumptions, as well.)
So, basically. My reaction to these 180 pages is one part WHAT THE FUCK DID I JUST READ to three parts WHY THE FUCK ARE YOU BORING ME WITH THIS BULLSHIT.
Disrecommend.
This post brought to you by the support of my backers at Patreon. If you enjoy my work, you too can support it here!