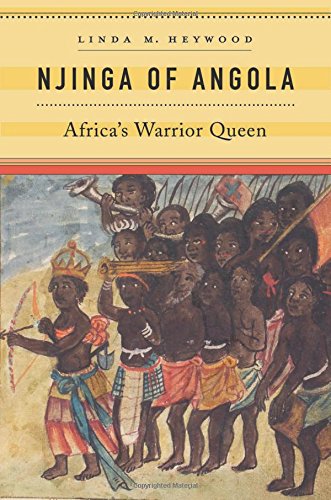 Linda M. Heywood is a historian at Boston University. (I believe her research focus is on south-central Africa and its relationship with the transAtlantic slave trade, and the cultural transformations that took place as a result of the interactions between the colonisers and indigenous peoples.) In Njinga of Angola, she’s written the biography of a 17th century African queen who came to prominence in the kingdom  of Ndongo (now within modern-day Angola) just as the Portuguese were attempting to establish dominion over the region.

Njinga lived a long and interesting life. She inherited her royal position in her forties, although she had previously been active within the court of her brother, and participated in his diplomatic efforts with the Portuguese. (As an ambassador to the Portuguese authorities in Luanda, she accepted baptism, although during the course of her life she adapted her religious practices to suit her political needs — including a period where she rose to be a war-leader among a cultural/political group whose practices included cannibalism as well as human sacrifice.) She would go on to remain a powerful force in the region until her late seventies, before dying in her — as far as I can tell — early eighties. She was basically a woman who did not quit and appears to have been immensely astute as a war-leader, and very canny as a diplomat and a politician. Well, except perhaps for the matter of arranging the inheritance of her kingdom, but you can’t blame someone for not keeping things in order after they’re dead.

Njinga of Angola divides itself into seven chapters, an introduction, and an epilogue. The introduction, naturally enough, introduces the book, the evidence, and its limitations. The first chapter, “The Ndongo Kingdom and the Portuguese Invasion,” provides context and background for the Ndongo kingdom, its society and culture, and the changes it experienced for approximately a century prior to Njinga’s rise to prominence. The second chapter, “Crisis and the Rise of Njinga,” discusses the political and military crisis of the Ndongo realm, and how Njinga managed to succeed to royal power after her brother’s death.

Subsequent chapters — “A Defiant Queen,” “Treacherous Politics,” “Warfare and Diplomacy,” and “A Balancing Act” — detail the next four decades of Njinga’s life. While the Portuguese succeed in dominating much of the territory  of Ndongo, despite Njinga’s resistance, she never stops fighting to a) hold on to and/or reclaim her royal power and b) retrieve her sisters from the Portuguese, after they are captured. Heywood details Njinga’s political manoeuvres and alliances, including the period of her life when she becomes an Imbangala war-leader, participating in their rites and rituals. She uses the forces, and the reputation, which she develops, in order to take over the region of Matamba and prosecute her war to reclaim her Ndongan royal authority. Heywood details how, at the close of Njinga’s life, she moves towards a more diplomatic and accommodating praxis, using religious diplomacy, utilising certain missionaries to help reframe her relationship with the Portuguese, and making overtures to the Pope in order to have her authority recognised.

This biography of Njinga is a fascinating examination of a woman who the Portuguese colonisers saw as a “devil queen,” and of her context. It brought home to me just how much I don’t know how the history of Atlantic Africa. While the writing is at times a little dry, the contents are anything but: and on the whole, the book is worth the effort involved in reading it.

I want to learn more now.

I’d never really grasped the ways in which bell hooks is a foundational thinker for intersectional feminism before picking up this collection of essays. It is an uneven essay collection, and its referents are now nearly a quarter-century out of date, but much of what she has to say doesn’t seem radical to me – in part because over those two and a half decades, they became part of the approaches to feminism that predominate among the people from whom I learned about feminist theory and praxis. (They are still radical, mind you.)

Reading this collection has made me want to read more of bell hooks’ work, which is an excellent thing for any collection.

I want to write more about this biography of a 17th-century African queen who just did not quit and seems to have been immensely astute as a war-leader, as a diplomat, and as a politician overall (except possibly in arranging the inheritance of her kingdom, but one cannot blame someone for not keeping things in order after they’re dead). But in brief, it is a fascinating examination of a woman who the Portuguese colonisers saw as a “devil queen,” and of her context.

Brown uses the Lewis chessmen, famous pieces found on the island of Lewis in Scotland in the early 19th century, as a lens through which to examine the late medieval Scandinavian world, its trade connections, and its culture. Brown is interested in the origins of the Lewis chessmen, and sets forth the arguments for where they might have been made, although it is clear her sympathies lie with the theory which ascribes them to Iceland in the late 12th or very early 13th century. (Brown makes a persuasive stab at ascribing them to the hand of an individual ivory-carver, a women named as Margaret the Adroit in the Saga of Bishop Pall – not a saga that has been translated into English.)

Brown is a careful historian, nuanced in her treatment of the evidence, and cautiously qualifying any sweeping claims. But she is also an imaginative historian, and an evocative one. Her knowledge of the Scandinavian world and the Icelandic sagas shines through, and her ability to write both clearly and entertainingly about matters of which yr. humble correspondent knows very little is a rare gift among historians. This is fun history. I approve of it.