Third in trilogy. I haven’t read the first two, so walking in to this was a lot like coming in to a play in the middle of the second act – but it stands as a complete thing in its own right very well. Reynolds has improved greatly since the last time I read one of his novels (which would be going on eight years ago by now, so that’s unsurprising), or this novel is working with material which I’m a lot more primed to like. I was surprised by how much I enjoyed it. Multiple different machine intelligences, scientific journeys of discovery, sentient intelligent elephants, excellently interesting characters.

“The Terror,” which shows up towards the end as an alien intelligence’s protective mechanism to turn other people away from the record of their reaction to the knowledge that the universe will ultimately destroy itself… Well, it’s described in terms that mirror my periods of depression almost exactly. You mean there are people who don’t live with the knowledge that everything is doomed to annihilation and futility, and posterity is a myth and a lie? (Most of the time, I find the point in life is to be kind to other sentient beings and to do as little harm – and have as much fun – as possible, because kindness and being as good a person as possible are things that are worthwhile for their own sake, for the now that we have.) So I’m not sure the conclusion is as profound as it seems to think it’s reaching for.

But, you know. It’s a good book. I might have to read the first books in the trilogy now.

So many pretty books.

So many books! AND OH GOD KATE ELLIOTT’S COURT OF FIVES MY HEART MY HEART BE STILL MY HEART!

I, er, may have read most of that last already. IT IS AMAZING. 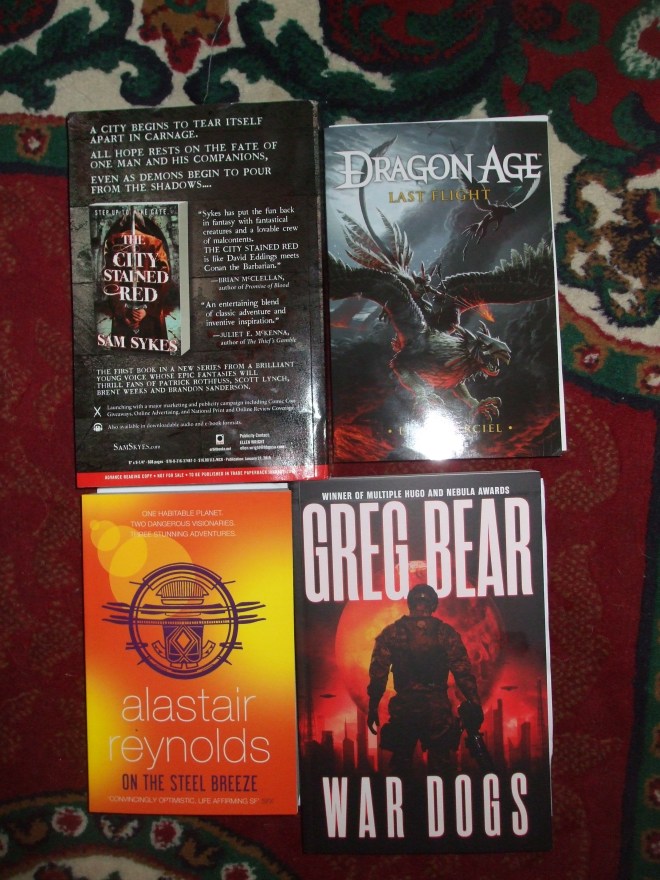