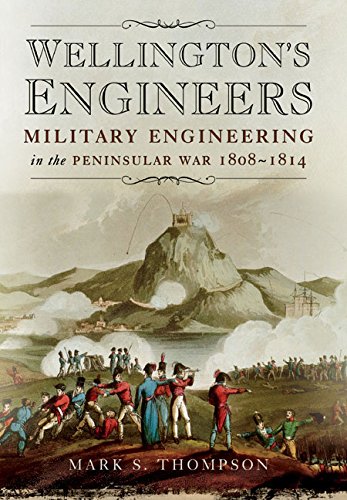 The Peninsular War refers to the campaigns in Portugal and Spain during the Napoleonic Wars. (The most prominent generals involved in this conflict were the English general Sir Arthur Wellesley — better known by his later title as Duke of Wellington — and the French Marshal-of-the-Empire Nicolas Jean-de-Dieu Soult. The Spanish and Portuguese military personalities of this period have been less well-remembered by history.) I’ve been vaguely interested in this theatre of the Napoleonic Wars since my childhood fascination with Bernard Cornwell’s Sharpe novels, and I’m always interested in historical logistics — the difficulties of transport, the technologies of moving large numbers of people and large amounts of material in a period before the invention of the internal-combustion engine and a modern road system — so I decided to give this book a shot.

Unfortunately, contrary to the implication of its subtitle — Military Engineering in the Peninsular War — Wellington’s Engineers is far more concerned with the engineers themselves, their personalities, and their political conflicts among themselves and with the military leadership, than with the logistics and details of the engineering challenges which they faced in the course of their duties. That’s not to say that Thompson doesn’t talk about engineering. He does. But he talks about engineering in terms of who went where, and when they went, and what they built there, and how many guns were employed in the course of a siege, and why the sieges were lifted, rather than talking about actual engineering details. What’s involved in digging a trench in a 19th-century siege? What sort of thing is a Napoleonic redoubt or a gun battery? How do you set a mine, or blow up a bridge, or build and maintain a pontoon bridge? These things are sadly not covered in any detail, although Thompson does offer a brief appendix on pontoon bridges, and one on the education of the Royal Engineers in the British Army of the time.

I will confess to a little disappointment.

Wellington’s Engineers: Military Engineering in the Peninsular War 1808-1814 discusses the employment of Royal Engineers during the Peninsular War chronologically. It comprises nine chapters, an introduction, and a conclusion: seven of the chapters deal with one year of the war, while one chapter (chapter three) discusses the lines of Torres Vedras and the defence of Portugal in greater detail and the final chapter (chapter nine) takes the narrative of events from 1813 to 1814, out of the Iberian Peninsula, and into France itself. Thompson does a good job in general of keeping timelines straight and bringing documentary evidence clearly into the narrative, as well as letting the letters humanise the subjects of this history.

But. (You knew there was a but coming, didn’t you?) Thompson’s really not a great writer. His sentences are at times strained, his narrative has no energy or sense of personality (well, apart from a prosingly dull one), and he has no sense of pacing or tension. At times he confuses the right word for the almost right one, and he has very little interest in discussing anything thematically — or at least, thematically in such a way that I can tell there’s a theme. And the little tables he uses to illustrate siege timelines are annoyingly confusing.

If you have a particular interest in the Royal Engineers as individuals during the Peninsular War, or a timeline and discussion of what sort of engineering works took place, this is a decent book. If you’re interested in the relationships between senior engineers and the military leadership, then it’s actually quite good. If you want something that looks in detail at the technology and techniques of military engineering in this period, though?

This is not that book.